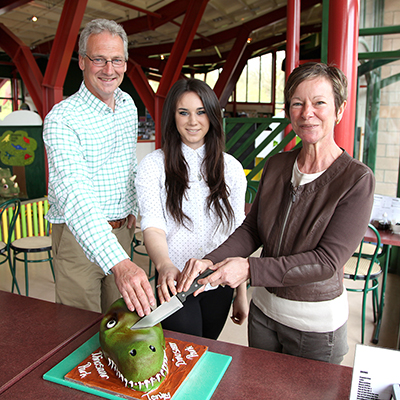 If you had turned on your television set in Narbeth or Hakin, Goodwick or Pembroke Dock in 1994 you would probably have been greeted by the sight of the Rugrats or Absolutely Fabulous; or you may have seen Brazil winning the World Cup in the USA; or, perhaps, you might have glimpsed OJ Simpson, live on the news, fleeing police in his white Ford Bronco.

If 1994 was the year Kojak, aka actor Telly Savalas, died (kids you'll have to Google that one), it was also the year both British diver Tom Daley and Canadian teen idol Justin Bieber were born; as well as the moment Sony released their first ever play station.

But down here, in windy west Wales, none of that really mattered. For what was going on in the outside world was nothing compared to mysterious events that were taking shape just outside Tenby. Rumours were rife that weird and wonderful things were stirring near Pembrokeshire’s top seaside resort.

Up by the old Great Wedlock Farm, they said, passers-by had seen some very strange sights all in the same spot.

One driver reported the vision of a distant, rain-lashed building, wrapped in plastic, rising up ominously from the earth.

Another eyewitness was positive she’d witnessed a local tug of war team milling around suspiciously under a stormy sky.

And yet another swore blind that she had seen a dinosaur, a triceratops if you please, casually roaring at holidaymakers as they drove by.

The police investigated. The newspapers looked into it. The three motorists were dismissed as nincompoops. Everyone laughed. Nervously.

But the sightings, the rumblings simply would not go away.

Then suddenly, one morning, the rain stopped, the wind died down, the sun put its hat on; and, by the side of the road opposite the Great Wedlock Farm, as if it had been dropped during the night by an alien spacecraft, there it was…The Dinosaur Park!

So, 1994 may well have been the year the Channel Tunnel opened between France and Britain; and the year the remains of the world’s oldest human ancestor (4.4 million years old) were discovered in Kenya.

But, what the heck!

For those of us here in west Wales, 1994 could mean only one thing.

It was the first time dinosaurs had been seen in Pembrokeshire for over 65 million years.

Nothing, but nothing on the TV (or anywhere else for that matter) could compare with that!

20 years later, Amanda Meyrick, who owns the Park with husband Simon, remembers the historic moment so vividly, “Yes, we opened in 1994, after one of the wettest winters in recorded history. The weather was so bad, in fact, we had to wrap the building in plastic so that the builders were able to complete it in time.”

Aha! So that one driver hadn’t been seeing things after all.

“No, he was spot on,” Amanda continued. “As a matter of fact, neither was the motorist who claimed to have seen the tug of war team. They were local young farmers who had come to the Park to help lift Roger, our T-Rex, into the Park. On April Fools’ Day, of all days, would you believe?!”

And the triceratops? Surely that can’t be right. Can it? Well, can it?

“Yes, that’s true too,” Amanda laughs. “That was Mavis, our triceratops, who got off the lorry, decided she liked the grass verge outside the entrance, and proceeded to plonk herself down and roar at passers by. Very temperamental, she was. Oh yes.”

Since then Mavis has been featured on TV on ‘You’ve Been Framed’ not once, not twice, but yes, you’ve guessed it, three times. Amanda admits, “She loves all the fame and attention. Thrives on it, does our Mavis. And, of course, it goes without saying, the kids love her too.”

Several of the dinosaurs were hatched in Norfolk making for a long road journey to get to Great Wedlock, and over the years Simon has made so many trips back and for with dinosaurs in his trailer that locals no longer bat an eyelid.

Indeed, more often than not, a wise old farmer leaning on a gate along the roadside can be heard explaining to a farm labourer, still wet behind the ears:

“Ahhh, now that be Simon, see, takin’ one of them there pets of 'is out for a spin again, I dare say. Fair size on ‘em, mind you. ‘E likes his pets big, that Simon does.”

Since those early days The Dinosaur Park has grown and developed out of all recognition to become one of Wales’ leading tourist attractions hosting thousands of visitors every year.

And to get his latest ‘pets’ for the Park Simon now goes all the way to Zigong City in China where the best pedigree baby Chinese dinosaurs are hatched and raised.

They include the dinosaurs in the Park’s new ride, Jurassic Journey, and Ting Ting, the very cute, Chinese baby triceratops (no relation to Mavis), who’s been such a big hit with the younger children since arriving in Pembrokeshire, at Easter, with her scarf and suitcase.

“I think a big part of the reason the Park has proved so popular,” Amanda adds, “is that it has always had the feel of being a family owned business with the whole family actually working in the Park, rather than simply a business run by some big anonymous company. Our ethos, our aim, if you like, has always been simple: creating a safe environment for families to spend quality time together doing fun things.”

It’s an ethos that has worked wonderfully well, or as Amanda and Simon laughingly put it, “we set up The Park when we moved back to Wales not long after the first Jurassic Park film. We’ve had none of the problems Jurassic Park experienced in the film, thank goodness! And like ol' Mr. Spielberg we are still going strong, twenty years on!”

Every time we go, I love watching my 4 year old’s face when he stumbles upon another 'sneaky dinosaur,' during our walk throught the Woodland Trail, like it’s the first time he’s seen them (we’ve visitied quite a few times now). It honestly makes my heart swell to the size of a T-Rex.